Throughout the 19th and 20th centuries, Galway played an important role as a market and fair location for the people of the town and surrounding areas. On various market days, vegetables, butter and fowl were sold on the streets surrounding St. Nicholas’s Collegiate Church, cattle, pigs, hay and turf were sold in Eyre Square, willow baskets and potatoes were sold in Woodquay, potatoes were also sold at the Small Crane, turf was sold at Raven Terrace and fish at the Spanish Arch. Many of Galway’s place names give clues to the original locations – Fairhill Road, Fairgreen, the Small Crane, Market Street and An Fhaiche Mhór, the Irish for Eyre Square, meaning ‘The Big Green’. However, there are little few physical remains of Galway’s old markets. One such remnant is that if the scales in Crane Square. This scale or ‘crane’ was used to weigh potatoes and sacks to help establish weights and prices. There were similar scales in both Eyre Square and Woodquay.

The market at St. Nicholas’ has occurred since the late medieval period with traders coming from all over Connacht to conduct business. Produce for sale here included eggs, fowl, vegetables and butter. St. Nicholas’s market endured throughout the difficult 19th century and continued to thrive throughout the 20th century and onwards and has expanded to include many international foods, local produce and local crafts. The only time in recent memory that the market did not occur on a Saturday was in 1967 due to a National Farmers Association commodity strike. 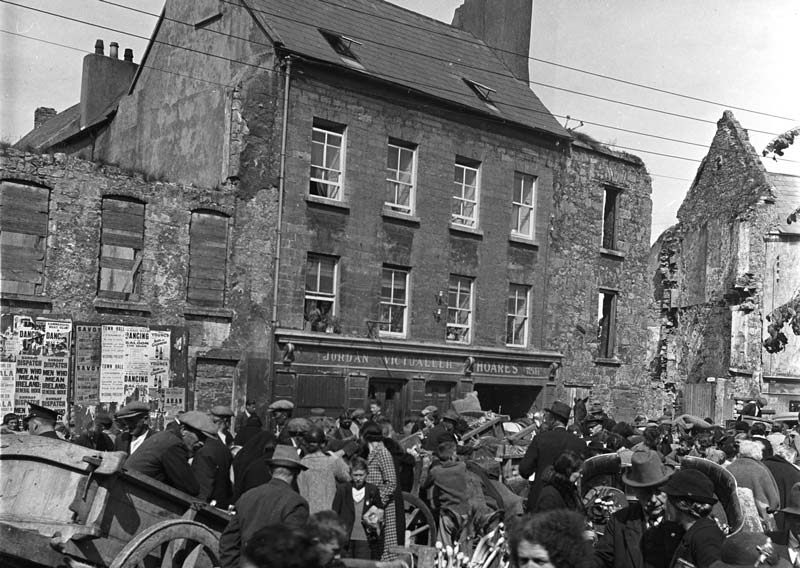 Fairhill in Claddagh was the site of Galway’s primary fair until the 19th century, with cattle, sheep, pigs, turf and hay all being sold on varying days. It later moved to the Eyre Square area, where there had been markets and fairs since the medieval period, often spilling out onto Williamsgate Street, Eglington Street and Forster Street.  Fair days created a lot of excitement in the town, where old friends could meet and a deal or two could be struck. The sights, sounds and smells, if not a little intimidating, must have been fascinating to an outsider, with many travel writers and visitors to the town in the 19th century having commented on the commotion of fair days. In the late 1940s it was decided that an alternative location was required and a decade later, a disused portion of the Galway-Clifden railway at what is now the Fairgreen area of town, became the new site.

O’Brien’s Bridge, formerly the West Bridge, was the first such structure over the River Corrib and was the west entrance into the medieval town. It was also the site of a number of markets including a meat and fish market. As it was primary thoroughfare into the town however, congestion, pollution and market overspill became serious issues, with the market often spreading towards Cross Street and Quay Street. Although a common occurrence in the markets, fish sellers appeared to be the worst offenders, often travelling throughout the town with creels and ciseáin, sometimes going door-to-door for a sale. The authorities in the town decided that it was necessary to move the fish market to a new location.

This market was established under the command of Governor of the District General Meyrick, who had been sent to Ireland during the 1798 uprising. He encouraged some of the primary citizens of the town to subscribe towards its development. The area that was chosen was the area at the Spanish Arch. Not everyone was happy with the new market however, as the sellers, primarily from Claddagh, had to travel a longer route to the new site. In fact, many sellers refused to leave the old market until the authorities forced the issue.

The new fish market became a hive of activity. The new reclaimed land, with its high riverside walls, provided extra mooring space for those bringing in turf, kelp and Carrageen moss, to dock at the market. Pollution as a result of the trade became an issue. An effluent channel was constructed to help wash away the remains of the day, but was often blocked by the many carts in the area. As a result, a rectangular slab of concrete, known simply as ‘The Concrete’, was constructed in the area so that the fish offal could be washed off into drainage channels.

By the end of the 20th century, markets and fairs in the town had dwindled. They were supplanted by small to mid-sized shops, followed by large multinational chains and shopping centres, providing a one-stop-shop for various goods and services. However, even now the market at St. Nicholas’ remains an important part of Galway life and in more recent times, the Continental Christmas Market and other style markets have developed showing that markets and fairs add significantly to the social and commercial life of Galway.