The Centenary of the Death of Michael Collins, 22 August 1922

On 22 August 1922, one hundred years ago today, Irish revolutionary leader Michael Collins was killed in a Republican ambush in his native west Cork. Though just 31 years of age, Collins had served as aide-de-camp to Joseph Plunkett in the GPO during the 1916 Rising, was IRA Director of Intelligence during the War of Independence, was one of the principal negotiators of the Anglo-Irish Treaty in London, and, at the time of his death, was President of the Irish Republican Brotherhood, Chairman of the Provisional Government of the Irish Free State, TD for Cork Mid, North, South, South East and West, Minister for Finance, and Commander-in-Chief of the Free State Army.

After Collins put his signature to the Anglo-Irish Treaty in December 1921, he predicted ‘I have signed my actual death-warrant’. Eight months later, after the outbreak of civil war, Collins was advised against touring his native west Cork, a hotbed of anti-treaty IRA activity; he replied: “sure, they won’t shoot me in my own county”. Unwisely, he toured in an open-top car through a landscape which favoured potential ambushers, rather than in the armoured vehicle that accompanied the convoy.

On the evening of 22 August, the convoy encountered anti-treaty republicans as it passed through Béal na mBlá, around 12km northwest of Bandon. A shootout followed and Collins was fatally wounded. Emmet Dalton (1898–1978), who was alongside Collins, later recalled: ‘I heard a cry “Emmet, I am hit.” … We found our beloved Chief (and friend) lying – motionless in a firing position, firmly gripping his rifle across which his head was resting. There was a gaping wound at the base of his skull behind his right ear. We immediately saw that he was almost beyond human aid; he did not speak.’

In the subsequent edition of the Connacht Tribune, a pro-treaty Galway newspaper, the editor wrote that ‘Men like Michael Collins only emerge once in a century, sometimes only once in the lifetime of a nation. A few years ago he was unknown. Before his death he was the idol of all his people, the personification of freedom, equality, and progress for his countrymen. Today, he lies stark and dead in the City Hall.’ The newspaper also reported on the local reaction to Collins’ death:

‘The scene outside Galway post office on Wednesday morning [23 August] when the official announcement of the death of Mr. Michael Collins was made could only recall the incidents witnessed in Ireland on the death of Parnell [Charles Stewart Parnell, 1846–1891, ‘the Uncrowned King of Ireland’]. Lady school teachers from the South of Ireland who are learning Irish in Galway burst into tears, and one or two strong men were seen to weep, publicly. There was passionate indignation, too, and bitterness of spirit such as is seldom witnessed in a lifetime.

In the ranks of the National army the reception of the news was such as to lead one to believe that new seeds of bitterness have been added to the all-too-abundant crop already sown.

“He was a man in a million,” said a leading local officer,” and he was loved by every soldier in our ranks.” The man whom the English could not get has, now been got by his own countrymen in his own county; and, it is the worst day’s work the irregulars [anti-treaty IRA] ever did.”

Col.-Commandant Austin Brennan issued the following in the orders of the day on Wednesday:—”The commander-in-chief of the Irish National army has been killed by irregulars in County Cork. The chief-of-staff has issued a statement to the army, and the best homage you can pay to the dead chief is to stand by that statement in mourning such a gallant chief; and I make a special appeal to you to abstain from any acts that some of you might be foolishly led to commit by this foul crime, and to observe silence as much as possible at your posts. All N.C.O.’s [non-commissioned officers] and men will cover one button of their tunic with crepe. Officers will wear a band of crepe on their left arm.” 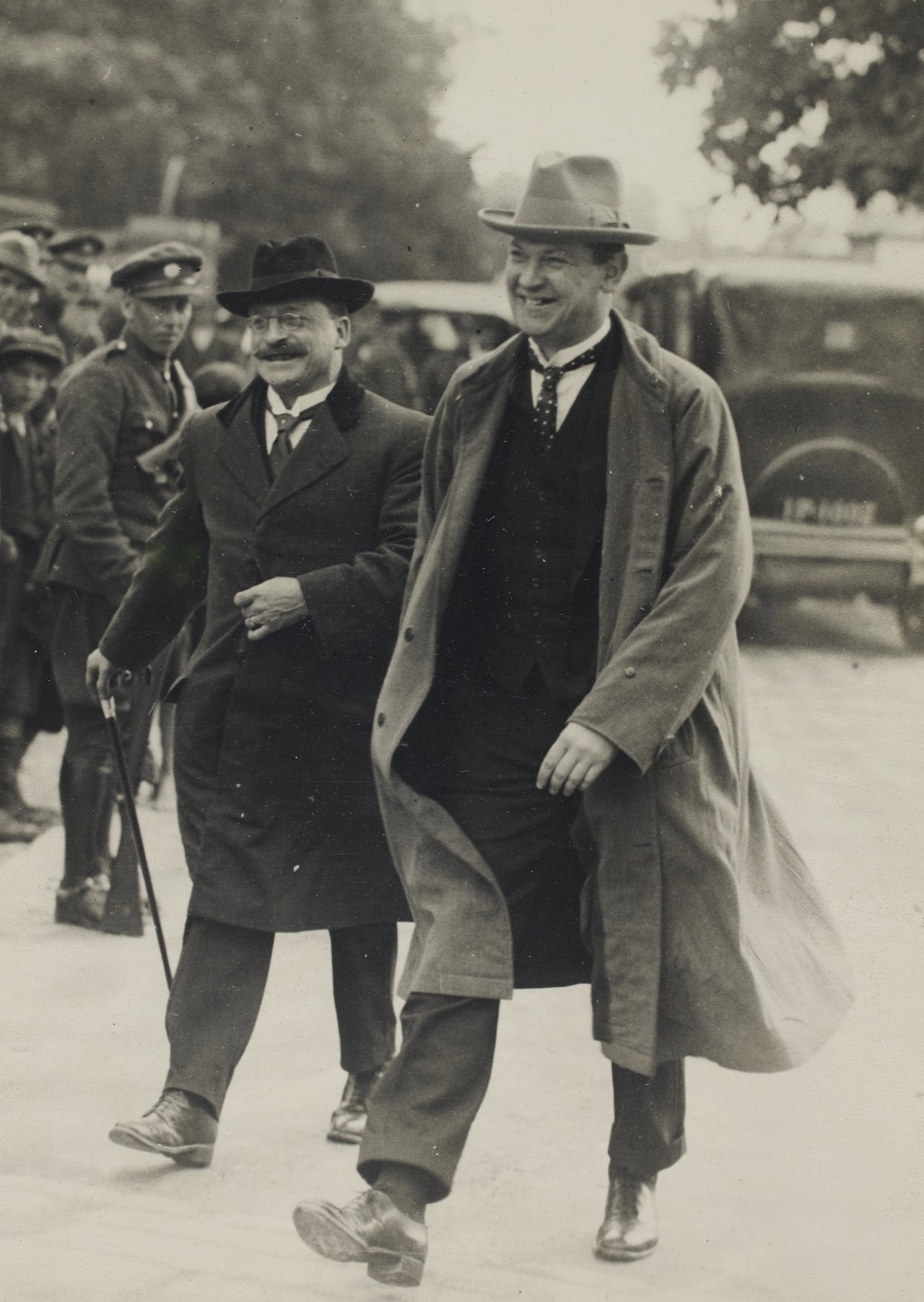 Arthur Griffith, President of Dáil Éireann, and Michael Collins, Chairman of the Provisional Government of the Irish Free State, outside Longford Cathedral, 21 June 1922. Both men would be dead within 9 weeks. Courtesy of the National Library of Ireland.

Mr. Padraic O’Maille [Galway TD Pádraic Ó Máille, 1876–1946] said that the death of Michael Collins coming so suddenly after that of Arthur Griffith was a heavy blow. He was the chief figure in the war against England, and was acknowledged as a born fighter and organiser, to which were added-the statesmanlike qualities of constructive ability. He was prepared to make any sacrifice for love of his country, and there was no risk any of his men would take that he was not prepared to take himself. He showed himself willing to go to any extremes to reconcile the anti-Treatyites. His death would weaken the position of his opponents, who by their tactics, were not helping Ireland; but destroying the ideal of a Republic, for which they professed to be fighting. Michael Collins was more of a Republican, and accepted the Treaty position in order to make Ireland strong, and put her in a position to reach her highest national aspirations. “I feel his loss keenly,” concluded Mr O’Maille, “not only because it is seldom a nation produces such a man, and we required his genius to build up, but because he was a dear personal friend of mine”.’ 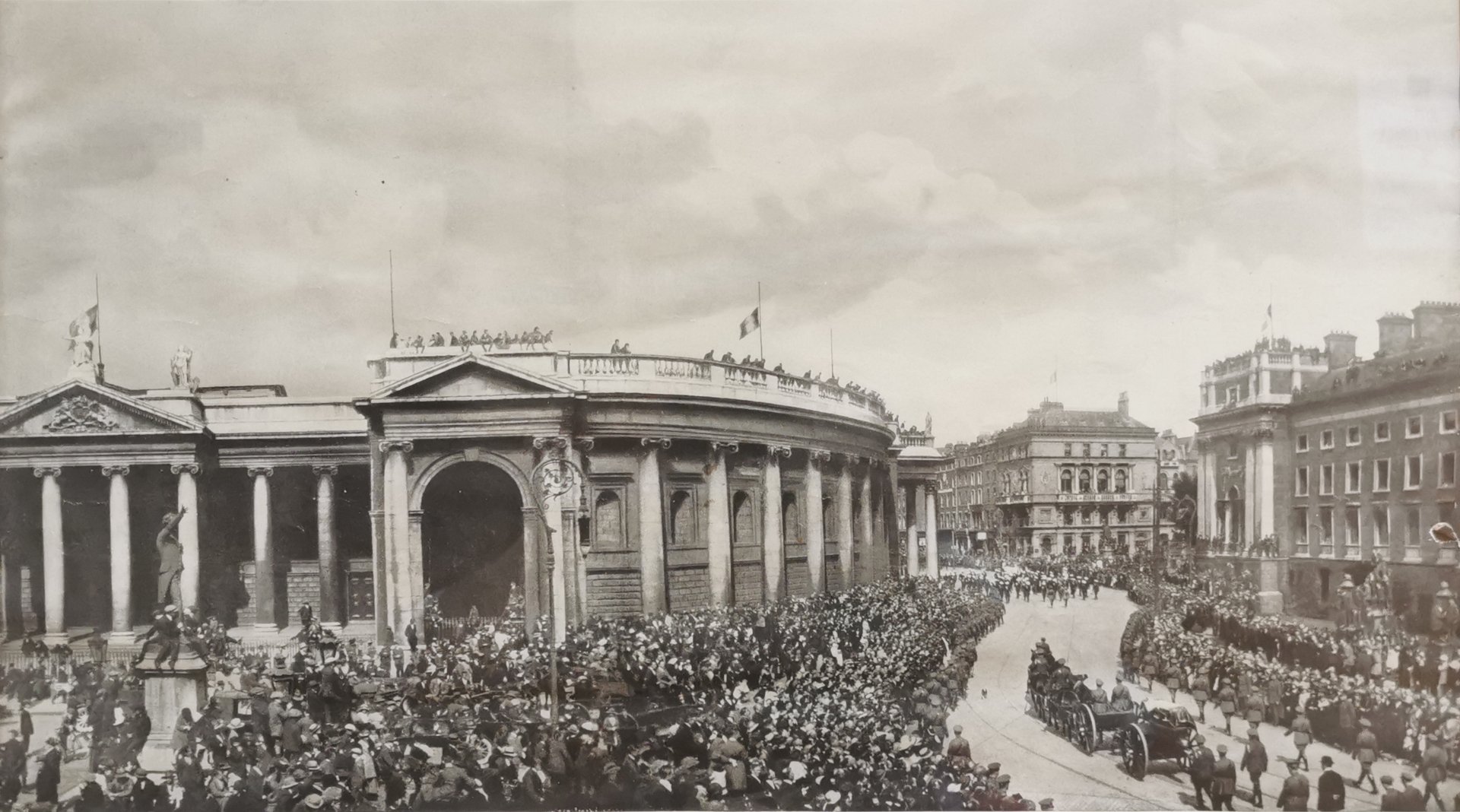 In the immediate aftermath, the acclaimed Irish playwright George Bernard Shaw (1856–1950) wrote to Collins’ sister, Johanna or ‘Hannie’: ‘I rejoice in his memory, and will not be so disloyal to it as to snivel over his valiant death. So tear up your mourning and hang up your brightest colours in his honour; and let us all praise God that he did not die in a snuffy bed of a trumpery cough, weakened by age, and saddened by the disappointments that would have attended his work had he lived.’

From their shared time in London, the Galway writer, Pádraic Ó Conaire (1882–1928) was friendly with Collins. A week after Collins’ death, Ó Conaire penned an obituary in The Free State, which concluded: ‘Dear Michael Collins, the greatest love of Ireland there ever was, now lying in your narrow coffin today, if it were God’s will that you should live five short years more, you would see your heart’s desire implemented, and you wouldn’t have to ask yourself, as your relative and fellow Corkonian, the poet Seán Ó Coileáin [John Collins, c. 1754–1817, of Ballingurteen], asked — what madness is on Ireland?’

For more on this period of Galway’s history visit Revolution in Galway, 1913-23.