For National Heritage Week 2022 Galway City Museum will host a series of one-hour talks about the local history, legends and folktales of the River Corrib. Afterwards, participants will be given a 4.5km Walking Trail, developed by Galway City Museum, to encourage further exploration beyond the museum walls of the city banks of the River Corrib.  An online version of this Walking Trail will be developed as part of the new museum website, supported by the Heritage Council under the Community Heritage Grant Scheme 2022.  Coming soon! 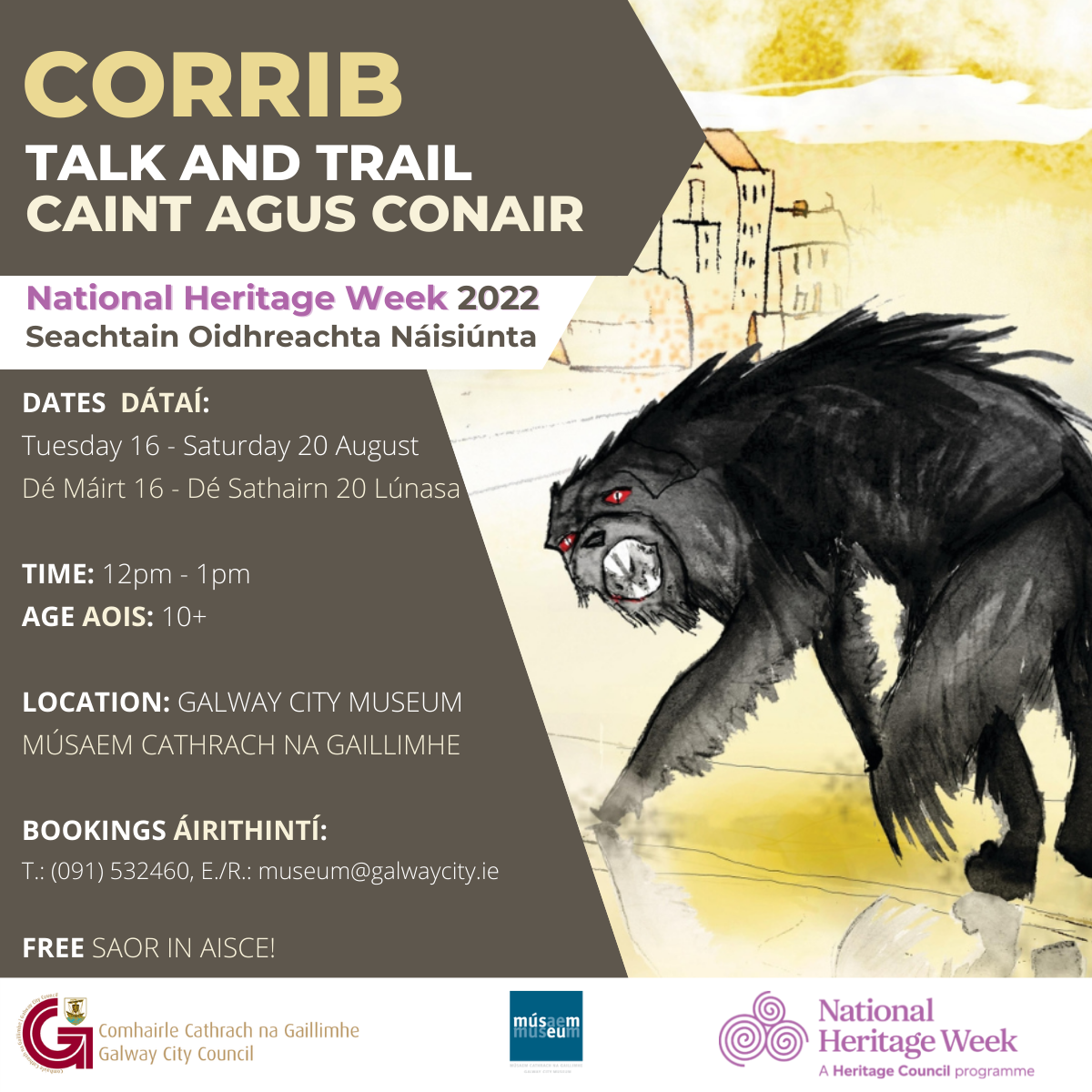 Lough Corrib is the largest lake in the Republic of Ireland. It separates the fertile limestone plains of east Galway from the lake-strewn bogs and rugged mountains of Connemara in the west. The lake is connected to Galway Bay by a short, yet powerful, body of water today known as the River Corrib. The sound of the river as it rushes towards the sea is, and always has been, the soundtrack to life in Galway.

This event is suitable for ages 10+ and admission is free! For further details or to make a BOOKING, please contact the Museum on (091) 532460 or by email to museum@galwaycity.ie .

An online exhibition on ‘The Corrib, Myth, Legend and Folklore’ will feature later in the year on the new Galway City Museum website, supported by the Heritage Council under the Community Heritage Grant Scheme 2022.  Coming soon!. This will make the content available to a wider community both for learning and enjoyment!

So what about the Black Dog?

According to local folklore, a large black dog, with “fiery eyes” and “snow white sharp teeth”, would rise up out of the Corrib and follow anyone who dared to cross the Claddagh Bridge (now called Wolfe Tone Bridge) after midnight. It was said that in the absence of a crucifix or holy water, which provided protection from the beast, anyone who was followed would have to outrun the dog as far as the crossroads at Lynch’s Castle – the dog could not pass the cross! Strangely, the beast is referred to as the gliomach, the Irish for ‘lobster’, but perhaps it originally derived from the Irish word gliobach meaning ‘hairy’ or ‘shaggy’.

This, it would seem, is a Galway version of a story commonly found throughout Ireland and Britain – the Black Shuck of East Anglia, the Gwyllgi of Wales, the Moddey Dhoo of the Isle of Man, and the Cù-Sìth of the Scottish Highlands.

In folklore, black dogs are commonly encountered late at night at intermediary places, such as bridges or crossroads. Their function, it seems, is to warn people against late-night rambling, drinking and card-playing.

Downriver of the bridge, by the Spanish Arch, are the so-called Devil’s Steps. It was said that anyone who approached the steps after midnight would be pulled or lured into the river by the devil himself. Is it a coincidence that the steps are located at one of the most dangerous stretches of the Corrib, where the river current collides with the incoming tide? 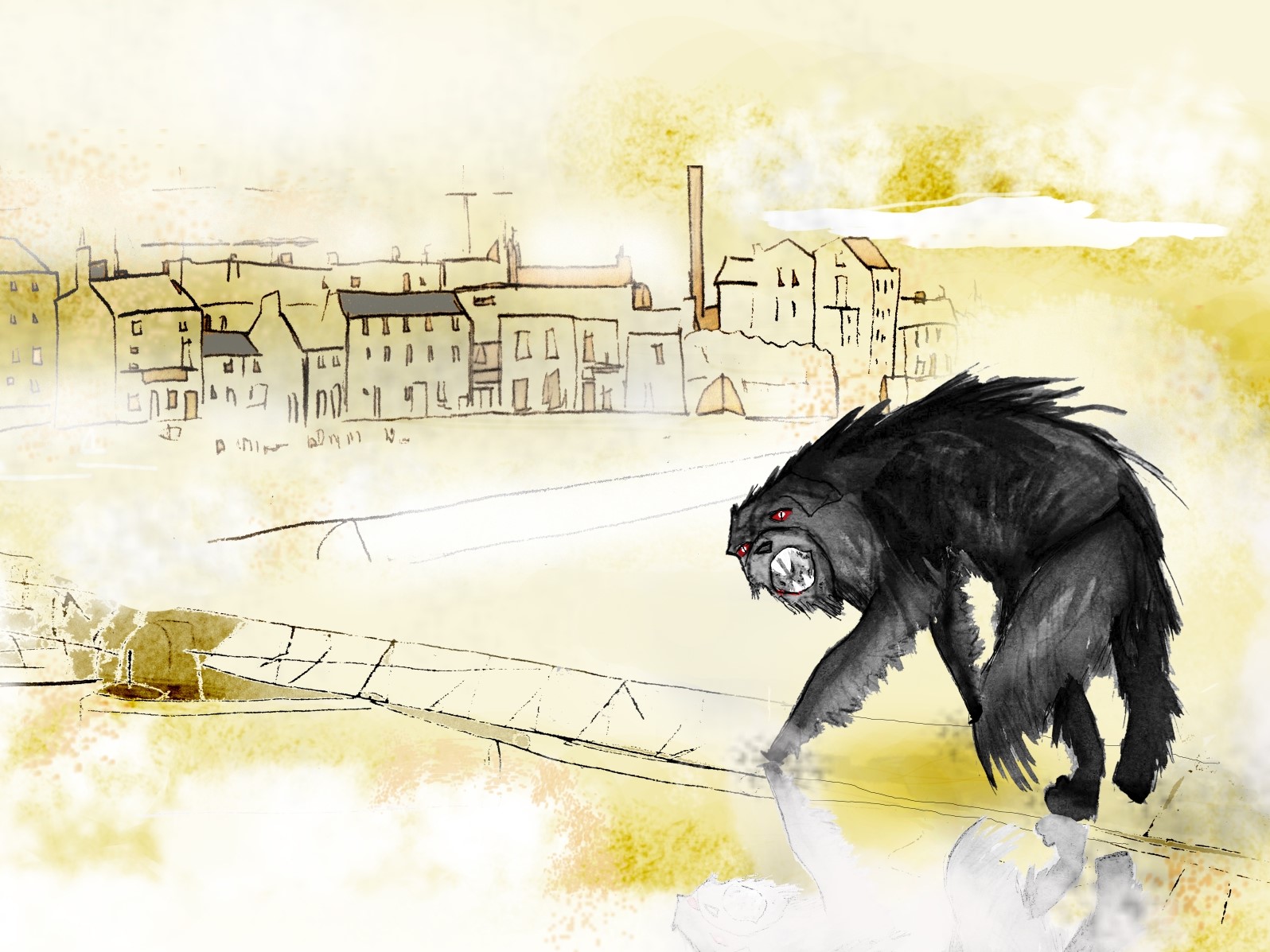 IMAGE: The fearsome black dog, known as the ‘gliomach’, that is said to reside beneath Galway’s Wolfe Tone Bridge, by artist Sadie Cramer.

For more on upcoming events go to WHAT’S ON