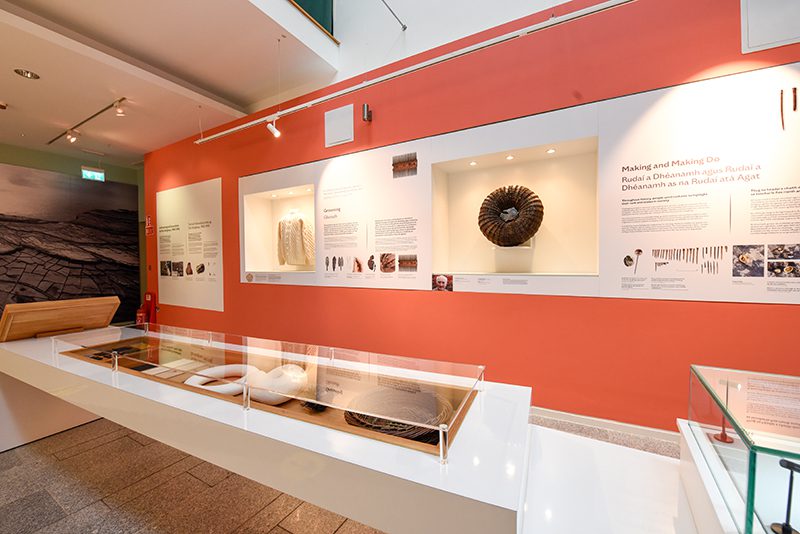 ‘Our vision for the exhibition blends digital, physical and tactile experiences to tell this story in a manner that we hope will entertain, inform and delight audiences of all ages.’

MONUMENT is presented by Galway 2020 European Capital of Culture and Galway City Museum.  With a primary focus on the stone forts of Aran, and on Dún Aonghasa in particular, this innovative exhibition investigates some of Europe’s most impressive stone monuments located on some of Europe’s smallest islands.

I have visited the exhibition several times between the museum closures imposed by lockdown and find a new treasure to explore each visit.  Through the use of vibrant colours and clever disguise of existing display cases, and the creation of new ones, the curators have presented beguiling, contemporary exhibition.

The Galway Museum building presents with unusual spacial challenges but the curators transformed a long arcade dominated by a suspended (life size) Galway Hooker into a really convincing exhibition space.  They have displayed a multitude of art forms, graphics and artefacts in a meaningful way – a triumph in presentation terms.  All elements of this exhibition enjoy carefully designed spaces to breathe and the perception (which is far from reality I’m sure!) is that it has all been effortless.  There were spaces to read, touch, reflect, stand back … and rest…  This is a very special exhibition.

The National Museum of Ireland have installed a selection of artefacts found during excavations at Dún Aonghasa, Inis Mór, into the MONUMENT exhibition at Galway City Museum.  The archaeological excavations of the fort at Dún Aonghasa were undertaken between 1992 and 1995.

Dún Aonghasa is one of the best-known archaeological monuments in the west of Ireland and stands at the edge of Inis Mór, Aran Islands, Co. Galway. It has been a National Monument in state care since the late nineteenth century. The fort proved to have a long history, beginning in the Late Bronze Age around 1000 BC and continuing into the early medieval period around 1000 AD. During the excavations the remains of prehistoric and early medieval houses were uncovered, as were human remains and a bronze casting workshop.

A varied selection of finds, now on display in Galway City Museum, were discovered on the site reflecting the everyday life of the people who lived there. They include parts of Late Bronze Age cooking pots, a late Bronze age tweezers, amber beads which probably formed part of a necklace, an early medieval comb used for grooming and delousing hair, bone pins and needles for making clothing and stone tools. 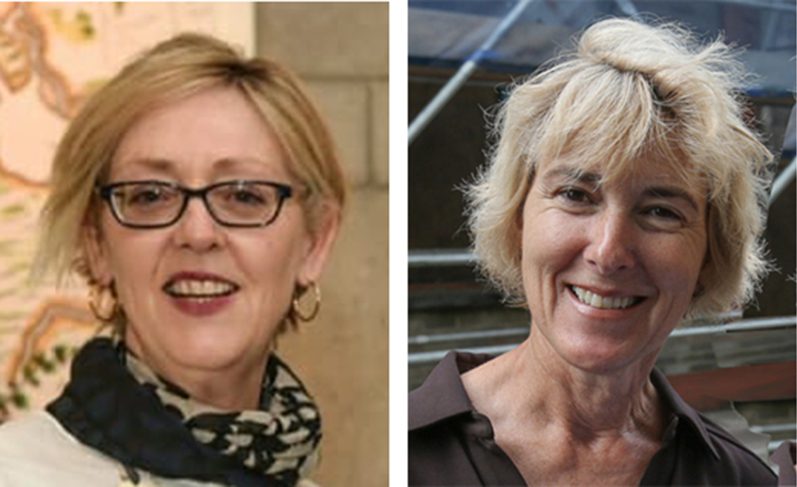 The exhibition was curated by Eithne Verling, Director of the Galway City Museum and Sybil Curley, Architect (above left & right).  Seán Reynolds and his team at Alphaset in Limerick constructed the exhibit and the production manager was Declan Gibbons.

The project has been inspired by the three themes of the Galway 2020 European Capital of Culture programme – Landscape, Language and Migration.

This article is by Hilary Morley from making.ie

Take a virtual tour of this museum at this link